This article is a stub. You can help the Ushio and Tora Wiki by expanding it. 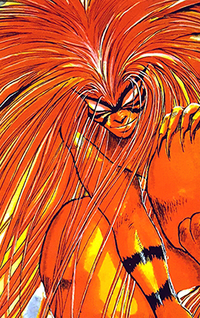 Over 2000 years ago, Tora was a human named Shagakusha born in Tenjiku (Ancient India). On the day he was born, Hakumen no Mono appeared as a shooting star and coincidentally chose the baby to be his vessel. The shooting star fell on the baby's house and everyone within its vicinity were obliterated, while Shagakusha was perfectly fine. From that day on, he was known as a cursed child.

As Shagakusha grew up, he hated everyone and everything when he was only a child. He would often get into fights and citizens would throw rocks at him. He would steal food just to survive and lived alone in alleys. Every time he felt hatred, his shoulder would throb.

When he was an adult, Shagakusha became extremely muscular and was a great asset to the army of his country. Even while fighting, he was full of hatred for both his comrades and enemies. However, compared to when he was younger, the townspeople constantly praised him and treated him as a hero. Shagakusha didn't trust anybody because their insults became praise after seeing his strength. Although he was honored by the citizens of India, the royals still belittled him and told him not to get cocky, causing his shoulder to throb even more from his hatred for people.

After leaving the palace, he is greeted by his attendant Rama, who is annoyed at how Shagakusha is treated by the royals. Shagakusha asks if Rama is sick of being the attendant of a man like him, but Rama laughs it off and says he wants to be just as strong and kind as Shagakusha one day. Later, the three royals harass a woman by stealing her bag of precious seeds and toss it to one another, while ordering the woman to serve them some drinks. The bag of seeds then land in front of Shagakusha. He punches the three royals several times which knocks them out, and the woman thanks him for saving her.

Shagakusha accompanies the woman to her farm, where she plants the seeds. He discovers that she is Rama's sister, and the two take Shagakusha back to their house. After drinking the soup that she cooked for him, Shagakusha smiles for the first time in his life. He realized that there's no way he can hate Rama and his sister. On a later day, Shagakusha goes to a vendor to buy apples, but the shop-clerk says there's no way that she can accept money from a hero. Instead, Shagakusha merely takes a flower from the shop and pays the lady a lot anyway. Just then, he is informed by fellow men from the army that a scout has returned from enemy lands, and the enemy will attack them tonight. He is ordered to guard the central gate because it'll be a fierce battle.

Instead, Shagakusha's first instinct is to run away with Rama and his sister. He goes looking for Rama but is told that he went to go buy equipment at a nearby town. Shagakusha worries that their land will be defeated in a single blow because the enemy is a huge nation. Determined to protect Rama's sister, he grabs her arm and runs through the forest of a mountain. She tells him that he needs to protect everyone but he doesn't believe that the citizens want a cursed child to protect them.

Community content is available under CC-BY-SA unless otherwise noted.
Advertisement